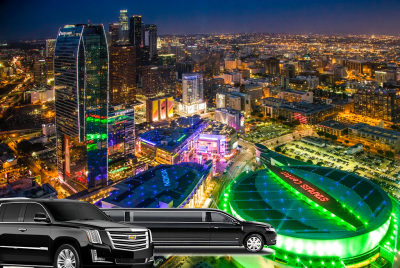 From the Walt Disney Concert Hall, L.A. Live and Olvera Street, Downtown offers some of the best things to do in Southern California. Downtown is home to popular venues such as the Staples Center, Grammy Museum and Microsoft Theater, but it’s also home to the city’s Old Town, great galleries in the Arts District and the city’s Fashion District. Like most parts of the city, Downtown stretches over a huge area. Here you’ll find some of the most quintessential LA landmarks, attractions, shops, bars and activities. The region’s best galleries are located on Gallery Row or the Art Walk, stretching from 4th through 7th and Spring and Main streets. The Grammy Museum is a must to see and is located at L.A. Live, also home to an array of bars, eateries, a bowling alley and even a movie theater. Head to the Staples Center to see a Lakers, Kings or Sparks game, or Dodger Stadium for a Dodger game. Wanna head for SoCal’s most authentic Chinese cuisine? Check out Chinatown. Wanna see the city’s birthplace and go shopping in stands for souvenirs and other items? Olvera Street is a must see for anyone visiting the city by limo or car. Let us introduce some of the most popular LA limo Downtown destinations for our services. 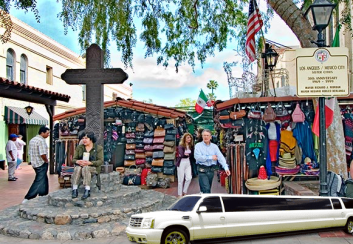 We have daily LAX sedan service calls for passengers leaving the airport with destination Downtown. Most often it’s for an event such as a concert at the Staples Center or a game at the Dodger Stadium, but also the occasional tourists heading to the Cathedral of Our Lady of the Angels, Olvera Street and the El Pueblo de Los Ángeles Historical Monument. Popular for local Angelenos and tourists alike is to stroll down Olvera Street, basically an open-air marketplace, and shop at the many street vendors and colorful stalls. In Old Town, El Pueblo de Los Ángeles, there is close to thirty historical buildings of interest. To get the most out of the city’s history, go on a guided sight seeing tour! On a tour or not, make sure to swing by the Avila Adobe, the city’s oldest structure. This is also where we find the region’s oldest Catholic church, La Iglesia de Nuestra Senora la Reina de Los Ángeles. Did you know the city was established in 1781 under the name El Pueblo de Nuestra Señora la Reina de los Ángeles de Porciúncula? Learn more about our city’s unique founding at the El Pueblo de Los Ángeles Historical Monument, which is also listed on the U.S. National Register of Historic Places as well as a U.S. Historic District. Too much history? Head to Santee Alley in the Fashion District for the best street vendors, bazaars and even knockoff items and unique souvenirs.

More interested in museums? Some of the most visited museums in the region are in Downtown. We recently welcomed LAX sedan service callers at the airport that wanted to go straight to L.A. Live. Were they going there for a show? Our driver asked during the trip, and no, they had all just arrived in the city and wanted the most essential L.A. activity: renting LA limo vehicles and head to the famous Grammy Museum! Here you can see exhibits on everything from Michael Jackson’s wardrobe and Neil Diamond’s memorabilia and first instrument. Make sure to visit the Museum of Contemporary Art, or MOCA, with tons of more contemporary arts and gallery exhibits. Next door is the Geffen Contemporary which is also well worth checking out. The Natural History Museum of Los Angeles County (NHM) is the most visited museum in town and features dinosaur skeletons, local history and fauna. Interested in Japanese-American history? Head to the Japanese American National Museum in Little Tokyo. Others include the Broad, FIDM Museum, the Los Angeles Theatre Center, and more. Take a stroll down the Broadway Theater District for the best arts. Downtown’s U.S. Bank Tower at 1018 feet isn’t just the highest building in the city, but the tallest building on the West Coast. For a unique day in L.A., consider going on a wine tour of town or other nearby vineyard areas, such as the Temecula Valley, Santa Ynez- or Temecula Valleys. We often transfer clients to Downtown’s San Antonio Winery for great wine-tasting in the city.

With its many tall skyscrapers, Downtown offers some of the best views in the region. Some restaurants offering great views of Downtown are the Perch, L.A. Prime, and WP24 by Wolfgang Puck. While the Perch is situated on an actual skyscraper roof, WP24 and L.A. Prime are located high up inside skyscrapers with stunning window-views of the city. There are also tons of additional great Downtown eateries. Visit for example Engine Company No 28 for some great all-American cuisine, or head to Sushi Gen for some of the best sushi the city has to offer. Some of those on an L.A. wine tour like to swing by Church & State Bistro for some of the best French wine varietals. Other great places for dining are Blossom, Bottega Louie, the Curry House, Empress Pavilion, Fickle, and Pete’s Cafe & Bar. For the best Downtown nightlife, try out the great beers at the Bona Vista Lounge or 1642 Beer & Wine. Great cocktails can be tried at Bordello, the Broadway Bar, the Edison, Mayan, Villains Tavern, and the Rooftop Bar. For great whiskey, check out the Seven Grand for their specialty. For a bar specializing in rum, see the Cana Rum Bar with their more than a hundred varieties of rums. Bigger fan of cognac? Check out the Black Dahlia at the Gallery Bar and Cognac Room. Barhopping and beer crawls are popular for LA and Malibu party bus renters. For the best Downtown shopping, the Fig at 7th is a great mall and the Grand Central Market and Broadway is another great pick. Other places of shopping include the California Market Center, the American Apparel Factory Store, L.A. Flower Market, the MOCA store, as well as Santee Alley for best knockoff items.

There are many tourists and others calling for a Los Angeles limousine in order to go to one of the great hotels and resorts of Downtown. Some popular LA limo hotel destinations are the Figueroa Hotel, Hilton Checkers, Inn at 657, JW Marriott at L.A. Live, Marriott Downtown, O Hotel, and the Standard Downtown LA. The Rooftop Bar at the Standard is an attraction in itself, overlooking the city from the top of the skyscraper. There’s also a 24/7 eatery at the Standard. Scenic Downtown views are also from WP24 at the Ritz-Carlton. For the city’s largest hotel, check out the 5 towers of Westin Bonaventure Hotel & Suites. The JW Marriott at L .A. Live has arguably the best location, situated right next to the Nokia Theater and countless night clubs, pubs, eateries, theaters, shops and more. For the best of L.A. entertainment – you have Downtown and you have Hollywood. And maybe Studio City… And Universal City, Burbank and certain other places. But attending a Downtown entertainment venue is like no other. Whether it’s the Staples Center, Microsoft Theater or L.A. Live you wanna head to, remember to check online itineraries for when your idols will perform. While the entertainment venues are the most popular Downtown destinations, do not forget to check out the Walt Disney Concert Hall and the other signature buildings such as the Broad, City Hall, Bradbury Building, Convention Center, Mark Taper Forum, and more. Whether it is for tours of Downtown or a Malibu wine tour exploring the Malibu Canyons – we are proud to be the top rated provider of Los Angeles limousine services and have served the region for over twenty years with exclusive limousines. Call us 24/7 at (866)-319-LIMO in Los Angeles or wherever Southern California destination you may be.