Simi Valley limousine clients and residents are often unaware of Simi’s disturbing and terrifying cult history. Let us refresh your memory and present to you some of Simi Valley’s most seclusive and dangerous sects through time. From the rather large Pisgah Grande sect to the smaller Manson followers, many don’t realize the extensive cult history found in and around Simi Valley. Did you for example now that the Pisgah Grande sect operated a hidden colony in the Las Llajas Canyon or years? At one point, the cult had more than fifty houses and over 300 members living in the secluded canyon in northern Simi. In more recent history, followers of Charles Manson resided in areas surrounding the Santa Susana’s in eastern Simi, and many locals will know the histories from the famous Manson Cave in Santa Susana Pass State Historic Park as well as Spahn Ranch, one of the Manson’s many hangout spots.

Besides Pisgah Grande, yet another Christian fundamentalist sect once residing in Simi Valley was the famous Blackburn Cult. The sect, – which poisoned people, burned former members in ovens and sacrificed animals, – was established in the 1920’s and found soon its place in Simi Valley. The ghost tours at Strathearn Park is a beloved local treasure definitely worth checking out for all Simi Valley limousine and party bus clients, a tour which often includes theatrical shows depicting the lives of the Blackburns. The Divine Order of the Royal Arms of the Great Eleven – or the Blackburn Sect as they’re more commonly referred to, – is among other things known for their killing of former cult member Florance Turner of Monterey Park, CA. In order to “save her from blood malady,” a brick oven was constructed and the cult burnt Turner to her death in the Simi Valley wilderness. Furthermore, Simi Valley limousine riders will be shocked to hear about the deceased body of 16-year old Willa Rhoads, which was found by authorities surrounded by numerous sacrificed animals and covered in salt. The seven sacrificed dogs surrounding her body was according to sect members a symbol of the angel Gabriel’s trumpet. LAX sedan service clients and other customers in the LA area might also know of the Blackburns. Before moving to Simi, the sect was located in Downtown’s Bunker Hill, an area maybe most visited by contemporary limo services in order to visit the Walt Disney Concert Hall, the Los Angeles City Hall and other iconic LA landmarks. Besides Simi Valley limousine services, we offer limo services throughout all of Southern California. In addition to Simi, we also have limo- and party bus hubs in Westlake Village, Santa Barbara, Ventura, Palm Springs and Los Angeles.

Despite countless cult members disappearing and violent scenes, authorities were never able to bring the Blackburns to justice. Its founder, May Otis Blackburn (1881-1951) was also a self declared queen with the ability to communicate with angels… Although a legal case was brought forth against May Otis, but the California Supreme Court made the rule that any attempts to limit the cult would be an intrusion of privacy and in violation with the right to religious freedom. Her book, entitled the Origin of God, was published in 1936 and includes numerous of her proclamations and alleged talks with the divine. Although never charged for murder, May Otis was charged with 12 counts of grand thefts and was later released. Many Santa Barbara limousine and party bus rental customers will wonder: what ultimately happened to the Blackburn Cult? After appealing her case in the early 1930’s and due to the 1931 California Supreme Court rule on religious freedom, Blackburn was released from prison and the sect left Simi Valley and relocated to the Lake Tahoe area.

While the Manson family and Blackburn sect counted a handful of followers, by far the largest of the Simi Valley cults were the fundamentalist Pentecostal Pisgah Grande sect, founded in Simi’s Las Llajas Canyon, in English translated to the Canyon of the Wounds. Here, many will perhaps know that the sect at one point counted more than 300 members living in complete seclusion in their own “village” in northern Simi. Led by Doctor Finis Yoakum, the community on the Marr Ranch Parkland counted over fifty buildings and locals looking for a party bus rental might recall the sect even having its own post office(!) in the Las Llajas Canyon. The sect ultimately relocated from Southern California to Tennessee. Today, the Canyon of the Wounds is most often visited for its beautiful nature featuring a nearly 50-acre dam, creeks- and creek-beds, oak woodland and beautiful panoramic views of the city, rolling greenery and many hills. While enjoying a picnic, photographing or hiking in today’s northern Simi, there are few hints of the long gone past once dominated by fundamentalists and secret communities. Las Llajas Canyon is located on public lands and you can book limo services or LAX sedan service to this location. 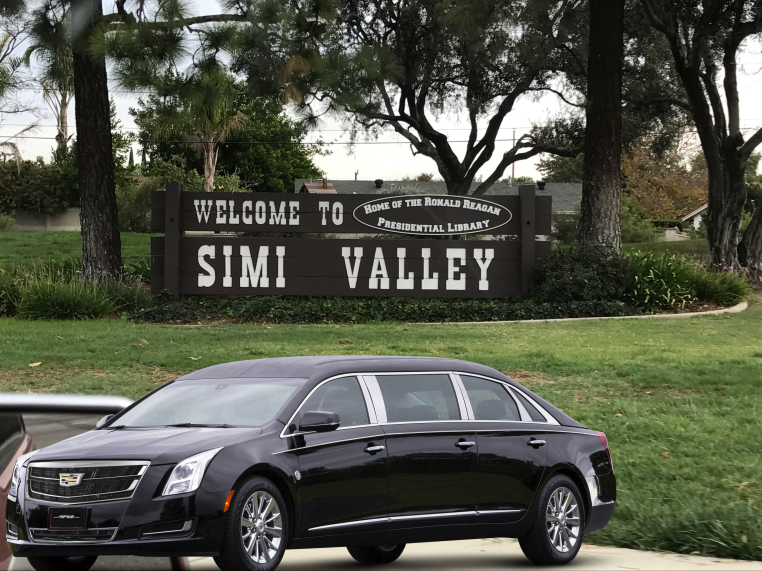 Although closer to Chatsworth, Spahn Ranch straddles the Simi-Chatsworth city borders. The Manson family lived on this ranch through much 1968 and 1969. At the same time, Spahn Ranch functioned as a movie-filming ranch where a number of movies and TV-series were filmed. An example is the movie Hangfire (1968) featuring Donald Jerome Shea (nicknamed “Shorty”). Shortly after filming the movie, “Shorty” was killed by the Manson family for calling the police to the ranch. He was decapitated at the ranch and his remains were discovered in December of 1969 near the Santa Susana Road. Spahn Ranch is now located within Santa Susana Pass State Historic Park and we still get requests for Simi Valley limousine services with this destination. Customers on local cinematic tours of Simi often love to stop by Spahn Ranch to see the filming locations for some of their favorite movies and television series. Just a few of the TV-series filmed here are Bonanza (1959-1973), The Lone Ranger (1949-1957) and Zorro (1957-1959). Some of the movie classics filmed here include Satan’s Sadists (1969), Hell’s Bloody Devils (1970), The Sadistic Hypnotist (1969), Angels’ Wild Women (1972), The Creeping Terror (1964), Revenge of the Virgins (1959), The Female Bunch (1969), Linda and Abilene (1969), The Ramrodder (1969), Hard on the Trail (1971), One More Train to Rob (1971),  Lash of Lust (1972), and many more. More recent movies filmed here are Curio Shop (2014), Inside the Manson Gang (2007), Frankie in Blunderland (2011), 6 Guns (2010) and Inside the Manson Gang (2007). The address of Spahn Movie Ranch was 12000 Santa Susana Pass Road. We’ve had a Simi Valley limousine trying to find the ranch passed the Santa Susana Pass, but since the address has been changed, seeing the former movie ranch is best by foot in Santa Susana Pass State Historic Park, by for example ordering limo services to 10215 Larwin Avenue. We’ve even had tourists utilizing our limo- and LAX sedan service from LAX airport to come check out Spahn Ranch!

Did you know Transformers (2007) was filmed in Simi? Click here to see a list of Best Movies Filmed in Simi Valley!

Whether for chauffeured Simi Valley limousine services, Santa Barbara wine tours, party bus bar hopping or any activity, a visit to one of the many historic sect sites in the valley may be horrifying and educational. And for whatever destination, you will arrive and leave safely with our Simi Valley-, LA- and LAX sedan service. Be safe out there!